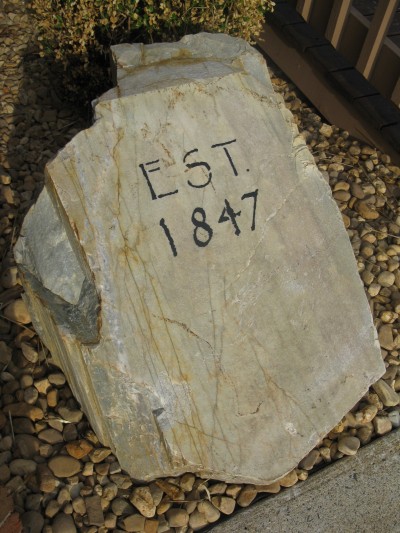 Although few records exist of the early days of the church, it is known that a Baptist Church congregation existed in 1847 with Armistead H. Ogden as its pastor. The actual Church building was built in 1848 on one- half acre of land donated by Mr. Nicholas Waugh to Armistead H. Ogden, James S. Gilliam, and Thomas Waugh, Trustees of the church. The church was named “Corner Stone” in 1853.

In 1860 pastor Armistead Ogden & Rev, John W. Hopkins ordained Thomas Breckenridge Gatewood of Amherst County. Pastor Gatewood served as pastor of Corner Stone as well as the churches of New Prospect and Piney Mount. In the late 1800’s, it was said of Corner Stone Pastor Gatewood that, “More people were led to make profession of their faith in Christ than under any other minister of his day in Amherst County.”

The original Corner Stone Baptist Church facility was used for seventy years and torn down to be replaced by a new building in 1922. This building served the congregation until July 26, 1973 when it was struck by lightning and destroyed by fire. A new concrete block building was erected on the same site. The first service was held in the new sanctuary on June 23, 1974 when it was completed enough to use. This new church building was dedicated on September 21, 1975. The building was later bricked when resources were available.

Corner Stone Baptist Church continues to exist today as a foundation of truth throughout the Naola community and Central Virginia area.